Are You a Chicken or a Peacock? – How to Succeed at Networking 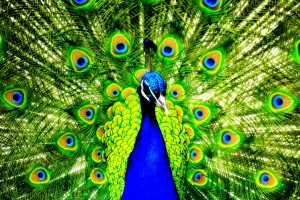 Networking is for the birds. Members of networking groups can be categorized into some distinct “birds of a feather” who share some common characteristics:

Owls: These creatures are blessed with an abundance of wisdom and experience but instead of sharing their strengths, they stay aloof – perched high above the crowd where they are content to observe everyone else. If you tend to be an “owl,” remember the adage, “People don’t care how much you know until they know how much you care.”

Hummingbirds: These brightly colored, intelligent birds dart quickly and quietly from flower to flower, gathering nectar. The networking “hummingbird” shows up to one or two meetings, passes around her business cards, then disappears. She never learns this secret about networking: it takes time and commitment with one “flower” to make the “nectar” flow.

Peacocks: The multicolored, iridescent plumage of a peacock is breathtaking to behold and this proud bird wants you to notice it. He is an opportunist who can’t wait to “strut his stuff.” His conversations center around him, his talents and his needs. The networking “peacock” gains little from networking because he quickly turns his audience off.

Dodo Birds: These flightless birds don’t get around much. They’re considered extinct and were last sighted over 350 years ago. The networking “dodo bird” is also missing in action and for some reason believes he doesn’t need to network. He is busy with the challenges of his business but fails to recognize that success in business is often a function of the quality and quantity of productive relationships that can be developed.

Chickens: These barnyard fowls are extremely valuable. Although they can fly when necessary, they’re not too proud, showy or self-important to get down to fundamentals and to interact with other chickens. They’re constantly forming productive and nutritious “packages” (eggs) to be shared with mankind and by the end of their lifetimes, they have produced enough nutrition to keep many from starvation. Networking “chickens” are those men and women who take an interest in the welfare of the group. They volunteer in many capacities and do their part to ensure the success of group members.

Successful networking is more about giving than receiving. It is not uncommon to hear someone say, “I went to that group but didn’t come home with any leads or referrals, so I thought it was a waste of time.” It is much more productive to attend a group with the idea that you are there to contribute. Then, as you consistently apply yourself to the group’s dynamics, you are looked upon as a trusted leader. As group members feel comfortable with your continued presence and genuine concern, they begin to notice opportunities in which your skills and especially your sincerity could be put to good use.

If you become the right “bird” for the job, you and your networking members could “fly off” into the sunset of business success.